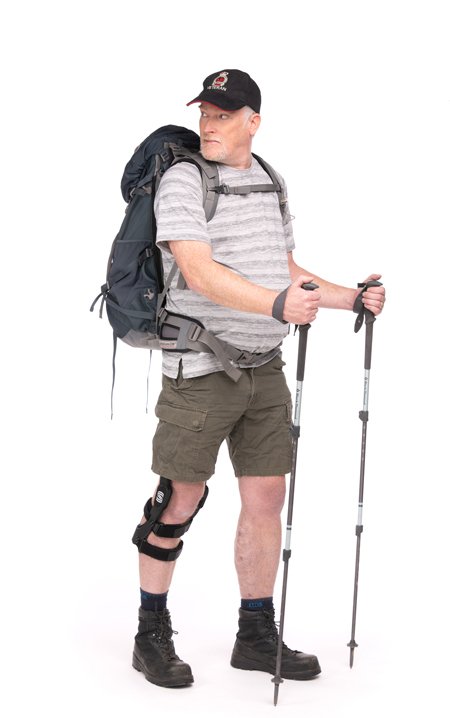 “My name is Dave Carney and I am a veteran. I served for 12 years as a Naval Communicator before I was medically released due to an injury I sustained during a fitness test. I am writing with regard to my experience with Spring Loaded’s knee brace.

The original knee injury happened back in 2008. It was one of those fluke things that at the time didn’t seem like much. I went to the hospital. I did the recommended physio, no big deal, but my knee was never the same. In 2011 I was posted to Saskatchewan. My main responsibility was to look after the computers and networks for my unit. While this took away the pitching decks and ladders of a ship, it also meant I was on my feet a lot more. This was a smaller unit and I didn’t have a team of people to assist the way I would have had on ship. I loved it. My knees did not.

After 6 months into the posting the pain in my knee became so bad I needed a cane to walk. Injections of cortisone and Synvisc numbed it and allowed me to move without wanting to rip my knee off. Pain meds had to be taken daily. I was sent for imaging, and the results came back that I had advanced osteoarthritis, which the doc informed me would only worsen. He refused to clear me for the annual fitness testing and started the process of putting me on a P-Cat (Permanent medical category). I was 40, and essentially told my career was over. I had a wife and two kids under seven. Depression set in.

The doc geared me up with an offloader brace, which helped somewhat but I still needed the cane. I felt like a failure to my family because I couldn’t play with my kids the way a dad should. I was also ashamed because the pain made me irritable and 9 times out of 10 my family bore the brunt of that. Gradually, I learned management techniques and how to budget my pain. A chronic pain specialist told me to think of movement almost like money. Spend too much of your movement budget on one thing, it’s going to hurt and prevent you from doing something the next day. Tasks like mowing the lawn had to be broken down into several days, instead of all at once. By the time I was posted back to Halifax, I had accepted that this is what my life was going to be like.

VAC and SISIP helped me complete my re-training. Not surprisingly, I would up taking computer courses thinking I would land a desk job somewhere and not have to move around much. Somehow I would up getting an on-the-job training position with the Halifax School Board as a roving computer tech. No desk job. Working out of the car and bouncing around between two different schools per day. Basically, worse for my knee than the job I had back in Saskatchewan. I figured I would just do the OJT and look for something else more suited for my handicap.

About two months into the OJT, I started hearing about Spring Loaded and their brace. I admit, I was skeptical because my current brace still left me in pain and I still needed the cane. I read everything I could find. I contacted Spring Loaded. I talked to my doctors about it. Spring Loaded was still a very new company at the time, so my docs didn’t have a lot of info but agreed to write a prescription if I wanted to try it. Nothing ventured nothing gained.

I called Spring Loaded and they invited me over to try one of their demo braces. As soon as I put it on, I felt an immediate difference. The Spring Loaded brace, while larger than my previous one, was lighter. The spring system seemed to do what was advertised. It not only kept things in the knee moving the way they are supposed to, but the stored kinetic energy made it easier to walk and bend. Spring Loaded was willing to let me try it for a few days, but I knew by the time I walked to the car, this was a game changer. I filled out the paperwork and Spring Loaded said they would be in touch once they had VAC approval.

I went home happier than I had been in years. I expected to wait several weeks before I heard anything from anyone. Not even six days later I had a call saying that my custom-fit brace was ready. Something truly amazing happened that first weekend. I was able to run and play with my seven-year-old son for the first time in his life. I don’t know who was happier. This amazing brace has given me life back. I was able to play with my kids. My pain has diminished. Instead of going for injections every three months, I now go twice a year. Instead of daily pain meds, I take them as needed. Even better, I don’t need a cane anymore.

The school board offered me a job at the end of my on-the-job training. I accepted and now provide tech support for five local schools, most of which have two or more floors. I am doing a job I love and am earning a decent living doing it. My depression is gone. My family life is better than it has been in years.

The Spring Loaded brace and the staff at Spring Loaded have literally changed my life. Their support is fantastic. Any issues or concerns, I give them a call and it’s usually handled in a day or so. They consistently reach out looking for feedback on how to make the brace better. Imagine, a company actually proactively reaching out to its customers asking for advice on their product. Not just a week or two later, but six months, a year, and longer. The product is great, but it’s the care and dedication of the Spring Loaded staff that keep it this way.

This is not a cure. I still have days when I push too hard, and my doc keeps telling me that a replacement is someday going to be necessary, but that’s not TODAY and it’s not TOMORROW. I enthusiastically recommend Spring Loaded to everyone I meet, and I thank Spring Loaded daily for giving me my life back”