Testing by the Canadian Military

Collaboration between Canadian Department of Defence and Spring Loaded Technology

The following improvements were observed:

Group performance averages for maximal leg press and 45kg squat test with and without the Spring Loaded orthosis.

Test performance from a single participant with meniscal injury. 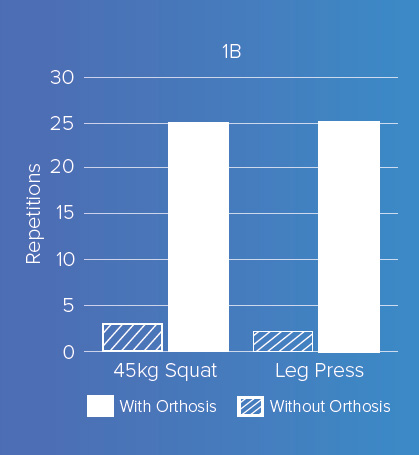 Improvements were even more pronounced in an individual with a meniscus injury where seven- and ten-fold improvements were observed in the maximum number of squats and leg presses respectively. A summary of these findings has been published as a white paper by Spring Loaded 2Spring Loaded Technology. Summary of Physical Performance Improvements Observed in Military Personnel While Wearing the Levitation Knee Orthosis. (2018). and is available for download on this page. Access to the original report is protected by the military.

Spring Loaded is currently collaborating with researchers at the University of Calgary to understand how the use of the Spring Loaded knee brace influences user-reported outcomes such as pain, knee function, quality of life, physical activity levels and use of medication and other treatments. U of C researchers are also quantifying the potential of Spring Loaded bracing to offload the patellofemoral and tibiofemoral knee compartments.

Mitacs is a national, not-for-profit organization that has designed and delivered research and training programs in Canada for 20 years. Working with 70 universities, 6,000 companies, and both federal and provincial governments, Mitacs builds partnerships that support industrial and social innovation in Canada.